Economical use of expensive helium | wittgas.com 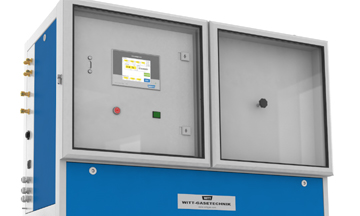 To counteract the high price of helium, Witt offers systems for the helium/nitrogen mixtures – these systems make the process much more economical. The initial test gas mixture, e.g. 20% helium and 80% nitrogen, is generated using a WITT mixer. After the leak tightness test of the product, the mixture is discharged from the test sample into a pipeline or a buffer tank and analyzed using a WITT gas analyzer. If helium has escaped during the test or if the test gas has mixed with ambient air from the test specimen, a WITT gas-dosing unit feeds in precisely enough helium to restore the required composition ratio of the test gas. The helium-nitrogen mixture prepared in this way can then be reused for further tests. All of this is done fully automatically.

At the technological heart of such a system is the perfect interaction of gas mixer, gas analyzer and gas dosing unit. Witt configures and scales the individual components to suit the size of application and other given parameters.

Witt is the market leader in gas processing technology and gas safety technology with over 70 years of experience.

You need advice?
We call you back!